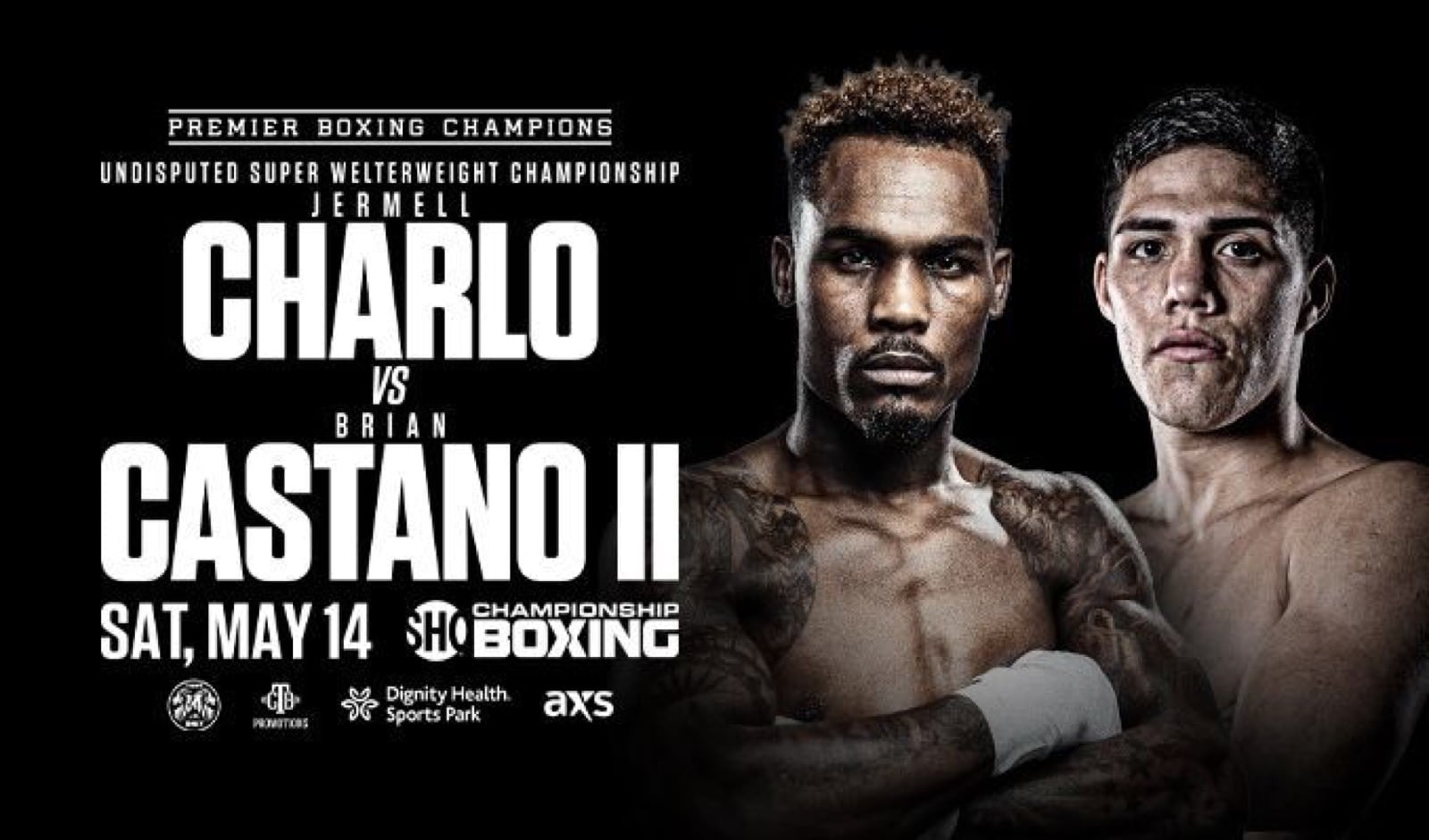 Unified WBC, WBA and IBF World Champion Jermell Charlo and WBO World Champion Brian Castaño will meet in a rematch of one of 2021’s most significant fights as they again seek to become the first ever undisputed 154-pound champion in the four-belt era on Saturday, May 14 live on SHOWTIME from Dignity Health Sports Park in Carson headlining a Premier Boxing Champions event. Click here to buy tickets!

Charlo vs. Castaño II was previously announced to take place on March 19 but was rescheduled after Castaño suffered an arm injury in training.

Tickets for the live event, which is promoted by TGB Promotions and Lions Only Promotions, go on sale tomorrow, Thursday, March 31 at 12 p.m. PT and can be purchased through AXS.com. Ennis vs. Clayton is promoted in association with D&D Boxing.

“Saturday, May 14 will feature a scintillating card live on SHOWTIME as fans will be able to enjoy three high-stakes fights, topped by the eagerly anticipated undisputed championship rematch between Jermell Charlo and Brian Castaño,” said Tom Brown, President of TGB Promotions. “Charlo and Castaño have proven once again that they are true warriors by going directly into this rematch that fans across the world demanded after the conclusion of their dramatic and unforgettable first fight. Now, the rabid sports fans in Southern California and watching live on SHOWTIME will get a front row seat to what shapes up to be an exceptional sequel at Dignity Health Sports Park, a venue renowned for hosting all-action contests.”

In an instant classic, Charlo and Castaño went toe-to-toe for 12 grueling rounds on July 17, 2021 on SHOWTIME, with the back-and-forth tilt ending in a split-decision draw. Each fighter believed they had done enough to have their hand raised in the first fight and will look to leave no doubt in the rematch.

Houston’s Charlo (34-1-1, 18 KOs) became a unified champion in September 2020, dropping Jeison Rosario three times on his way to an eighth-round knockout that earned him the WBA and IBF titles. Before that fight, Charlo had avenged the only loss of his career, as he reclaimed his WBC belt via an 11th-round knockout of Tony Harrison in one of 2019’s best fights. The 31-year-old is trained by Derrick James in Dallas and won his first world title in his debut fight with James by scoring an eighth-round knockout of John Jackson in 2016. He followed up that victory with three successful defenses, knocking out Erickson Lubin and Charles Hatley, and winning a decision over former world champion Austin Trout. Charlo returns to the same stadium where he won his first 12-round fight in a victory over Demetrius Hopkins in 2013.

“I’m the unified champ and I’ve got business to finish,” said Charlo. “My total goal as a kid was to win all of the belts as a professional and I plan to make history yet again on May 14, in front of my west coast fans and all across the world. If you know me, you know how I don’t take opportunities lightly – Lions Only, the time is now! Make sure you tune-in May 14.”

The 32-year-old Castaño (17-0-2, 12 KOs) put on a spectacular performance to capture the WBO title in February 2021, as he dominated Patrick Teixeira to wrest the belt away via unanimous decision. A native of Buenos Aires, Argentina, a win for Castaño on May 14 would be a monumental achievement in the storied history of Argentine boxing. Prior to winning his title, Castaño fought to a draw against two-division world champion Erislandy Lara in a 2019 action fight. He also owns triumphs over Michel Soro, Cedric Vitu and Wale Omotoso. A highly experienced amateur, Castaño notched victories over unified welterweight champion Errol Spence Jr. and top middleweight Sergiy Derevyanchenko before he turned pro.

“I’m thrilled to have the opportunity to face Charlo again for all four titles,” said Castaño. “This is champion vs. champion, just like it should be. The first fight was a great war. The rematch will be no different, but this time I won’t leave it in the judges’ hands. This is my era, and I will prove it.”

Ennis (28-0, 26 KOs) is the latest in the pantheon of outstanding Philadelphia fighters, combining sublime boxing skills with natural power in both hands. After numerous appearances on SHOBOX: The New Generation, the 24-year-old Ennis graduated to headlining his first SHOWTIME CHAMPIONSHIP BOXING telecast in April 2021, as he became the first fighter to stop former world champion Sergey Lipinets. He followed up that performance with an impressive first-round stoppage of veteran contender Thomas Dulorme in October. The knockout victory gave Ennis 18 KOs in his last 19 fights, with the only blemish being a no-decision in the first round against Chris van Heerden in December 2020.

“I can’t wait for this fight,” said Ennis. “This one means a lot to me. This is another step towards becoming a world champion. My time is now. Camp is going great, and I can’t wait to shine and put on a spectacular performance come May 14. It’s time for me to continue making big statements.”

A 2012 Canadian Olympian, Clayton (19-0-1, 12 KOs) fights out of Montreal, Quebec, Canada and will compete in the U.S. for the third straight time on May 14. The 34-year-old impressed in his U.S. debut in 2020, stepping in as a late replacement to fight former world champion Sergey Lipinets to a draw on SHOWTIME. Clayton most recently earned a 10-round unanimous decision over Cameron Krael in December 2021. He also owns 2019 victories over former champion DeMarcus Corley and Johan Perez, in addition to a 12-round decision win over then unbeaten Stephen Danyo in 2018.

“I love challenges and I know that I have a real one on May 14 against Jaron Ennis,” said Clayton. “That’s why I’m in this sport, to fight the best. When I prove myself against Ennis, nobody is going to be able to deny me a shot at the belts.”

The 24-year-old González (24-0-1, 13 KOs) will step in for his U.S. debut when he challenges Rivera on May 14 in Carson. A native of Sinaloa, Mexico, González has fought professionally since 2016, and owns a unanimous decision over former title challenger Ivan Morales in March 2021. González won a regional 122-pound title by stopping Alexander Mejia in July 2021, finishing the fight in round seven. Most recently, Gonzalez scored a first-round TKO over Antonio Guzman in December 2021.

“I am very happy to be fighting on a card of this magnitude,” said González. “To have my debut in the U.S. be on this stage, it is an opportunity that I have to take advantage of. No matter who my opponent is, I will always be ready and at my best. I am going to show everyone that I’m ready for the champions.”

Representing his native Bayamon, Puerto Rico, Rivera (19-2, 12 KOs) looks to make it three-straight victories on May 14. The 32-year-old put together a 12-fight winning streak between 2011 and 2017 before dropping a decision to then unbeaten Nate Green. Rivera returned to action after that fight in July 2021, winning a unanimous decision over Jonathan Lecona Ramos in his U.S. debut. Most recently, he stopped Wallington Orobio in November 2021.

“I was training at the gym when my manager told me I was going to be in this card,” said Rivera. “We never say no to any opponent that wants to fight me. I hope González is at 100% too, because I want us to put on a show for the fans and I want to continue on my way to fight for a world title. This is an opportunity I can´t let pass me by.”​

The O2 in London
No event found!
Load More