Maxi Hughes will now face Paul Hyland Jnr for the vacant British lightweight title on the huge #MTKFightNight on March 19.

Hyland Jnr was originally set to face Liam Walsh for the belt, but with Walsh still recovering from COVID-19, Hughes will now step in for the showdown.

The event will take place at the University of Bolton Stadium, and be broadcast in the US on ESPN+ in association with Top Rank, and worldwide on IFL TV.

Hughes (22-5-2, 4 KOs) had an incredible 2020, defeating former world title challenger Jono Carroll in August, before following that up by winning the WBC International lightweight title against Viktor Kotochigov in October.

He now turns his attention to Hyland Jnr (20-2, 7 KOs) who has previously challenged for the European and British lightweight titles during his career.

MTK Global Promoter Lee Eaton said: “It’s fantastic that Maxi Hughes is stepping up to take on Paul Hyland Jnr for the British lightweight title. Maxi has dreamed his whole life of becoming British champion, and now has his chance.

“It’s a shame that Liam Walsh is unable to fight, but full credit to Maxi for stepping up, and for Paul Hyland Jnr for taking the fight. It’s a brilliant 50-50 battle and one that I can’t wait for.

“It’s a massive show next month with Karim Guerfi also defending his European bantamweight title against Lee McGregor, with even more big fights set to be announced in the coming days.” 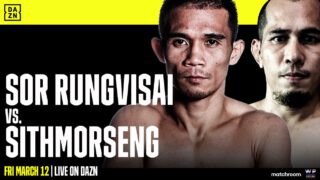