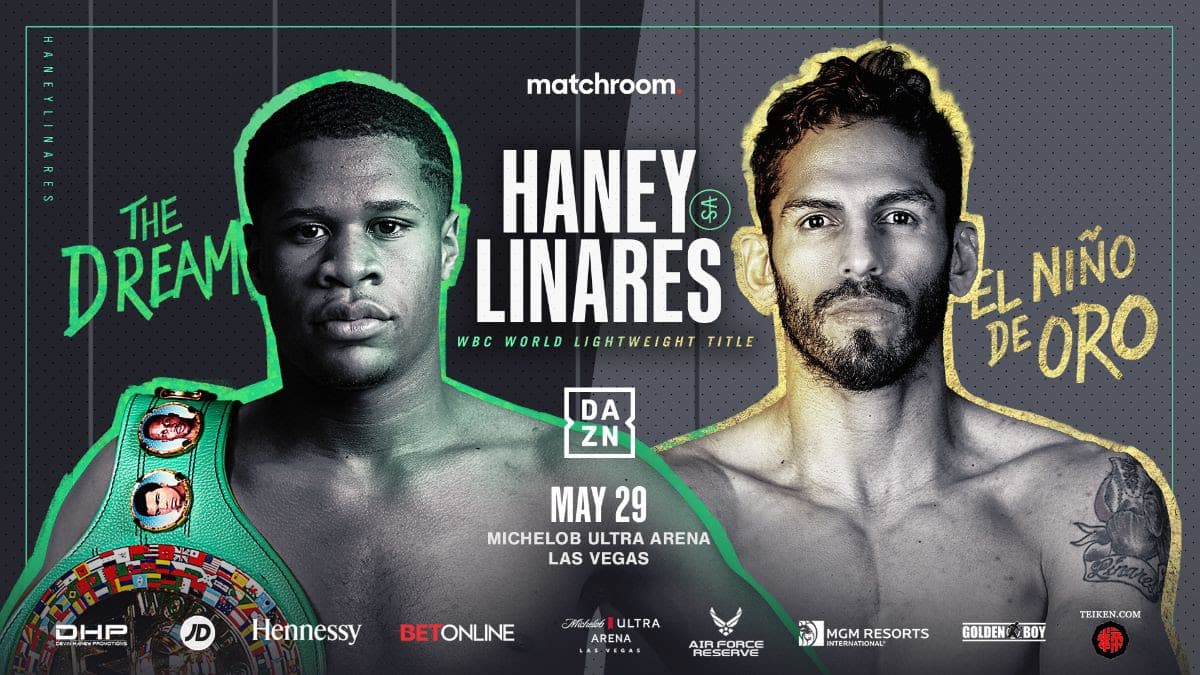 Devin ‘The Dream’ Haney will defend his WBC World Lightweight title against Jorge Linares at the Michelob ULTRA Arena at Mandalay Bay Resort and Casino in Las Vegas Saturday, May 29. The event will air live worldwide on DAZN in association with Devin Haney Promotions and Golden Boy Promotions. Click here to buy tickets for this fight

The spotlight will be on Haney (25-0, 18 KOs) over Memorial Day Weekend as he puts his belt on the line for the third time, this time taking on Linares who will provide the sternest test of the champion’s rich talents. The 22-year-old star will box in his Las Vegas backyard for just the third time in his career and first time since his sixth pro outing in May 2016.

‘The Dream’ was elevated to World champion after a destructive KO win over Zaur Abdullaev in New York in September 2019. He went on to defend his belt twice with comfortable distance wins over Alfredo Santiago in November 2019 and Yuriorkis Gamboa the following November.

“I’m very excited to be making my third World title defense against a great fighter like Jorge Linares, who will be the best fighter I will have ever faced in my career,” said Haney. “He’s a three-division World champion who has fought at the championship level for the past thirteen years.

“I grew up watching Linares and the fact that this fight is happening in Las Vegas is incredible. Boxing fans around the world are eager to see me step up in competition which is great, and I know Linares is coming to fight. I’m ready to give the fans a spectacular performance. The better competition brings the best out of me. Against Linares, I’m going to show the world why I’m the king of the Lightweight division.”

Linares (47-5, 29 KOs) is looking to become a two-time holder of the WBC strap that he won in December 2014 against Javier Prieto. The fight was a catalyst to a four-year run where the Venezuelan ace beat Kevin Mitchell, Ivan Cano, Anthony Crolla twice, Luke Campbell and Mercito Gesta as Lightweight king before he faced defeat in a to-and-fro clash with Vasiliy Lomachenko in New York in May 2018.

The 35-year-old takes on Haney in his 15th World title battle and 53rd bout in over 18 years as a pro. Linares believes there are plenty more chapters to be written in his storied career.

Linares said, “This is my moment to show the world that I still have a lot more to give at 135 pounds. Devin Haney is a talented and quick-handed young man, but when I was his age, I had already become a world champion by snatching the title away from a real World champion like Oscar Larios. And now you can imagine how much more experience I have now at an age where I feel stronger and better than ever.”

“Without a doubt it will be a tremendous fight, but I will demonstrate that Haney made a big mistake by accepting a challenge that he is still not ready to overcome.”

Promoter Eddie Hearn said, “This is the breakout fight that will show the world that Devin Haney is the best lightweight on the planet. Jorge Linares is a tremendous fighter, a three-weight king that has speed, power and plenty of experience.”

“I’ve represented four fighters who have attempted to beat Jorge and failed, but this time I believe we have the future king of the division in Devin, and this is his moment. May 29, the bright lights of Mandalay Bay in Las Vegas, this is the moment.”

Oscar De La Hoya, Chairman and CEO of Golden Boy, said, “We have worked with Jorge Linares for a long time and any time the so-called experts count him out, he comes back with a vengeance. Haney has never confronted anyone even close to Jorge’s skill level, and at 135, he is still a force to be reckoned with for anyone in the division.”

George Kliavkoff, President of Entertainment & Sports for MGM Resorts International, said, “Mandalay Bay has been synonymous with boxing for more than two decades and we look forward to continuing the tradition with our event partners. The opportunity to host a fight of this caliber, and doing so safely, is another step in the return of championship events to the Sports Capital of the World.”

Devin Haney says his fight against Jorge Linares is the biggest of his career to date as prepares to defend his WBC World Lightweight title at the Michelob ULTRA Arena at Mandalay Bay in Las Vegas, Nevada on Saturday May 29, live worldwide on DAZN.

LINARES: THIS IS A DIFFERENT LEVEL FOR HANEY

Former World ruler confident of handing WBC king his first pro defeat
Jorge Linares has warned Devin Haney that he is stepping up to a whole new level as he prepares to challenge the WBC World Lightweight champion on Saturday May 29 at the Michelob ULTRA Arena at Mandalay Bay in Las Vegas, NV, live worldwide on DAZN, in association with Golden Boy Promotions.

The 22 year old champion has admitted that the Venezuelan star is the toughest fight of his career and has vowed to prove that he’s the man to beat at 135lbs, but Linares believes that he has the goods to end the rising star’s title reign and return to the summit on Saturday.

“It’s a big fight and a new challenge for me,” said Linares. “I have a lot of respect for Devin. He’s a young guy, a World champion, but on Saturday the respect goes, and I am ready for an amazing fight, and I hope he’s ready too. He knows who he is fighting – a four-time World champion. I have a lot of experience and that’s the most important thing in this fight to win the fight. He doesn’t have that. He has talent, he has youth and hunger, and the belt.

“A fight with me is a different level. I can show so many styles, I’m naturally fast and strong, I don’t have a lot of KOs, but he knows I can punch. I think he will run all night, but I will be waiting for him, I will follow him. If he wants to fight inside, I am ready for him. He’s going to have big problems on Saturday night, he knows I can do everything, and he knows I have to timing to put him down.

“I know his style, I trained with him a long time ago in Vegas and we did some sparring. He was a baby then! But he’s a champion now and I hope he’s ready for a tough fight.

“I don’t need to say anything about what he’s said. I just think about myself and what I need to do, not what he says or does. I don’t like to talk too much, I don’t need to talk to get fans or followers or anything, I just need to go out and do my job and put on a great fight.”

HANEY: THIS IS THE BIGGEST FIGHT OF MY CAREER

“It’s been a great eight-week camp. I started in Las Vegas, got some light sparring, then traveled to the Bay Area. I spent three weeks training with Victor Conte and Remi Korchemny at SNAC. The remaining weeks, I’ve been in Las Vegas, getting great sparring work with local pros that have been pushing me hard. I’m ready! The world will see, I’m the best fighter on the planet.

“Linares is a great fighter that has a lot left in the tank. He has held multiple world championships in three weight classes and he’s by far the biggest step up in my career. I give my dad Bill Haney, who is my trainer, a lot of credit, we know exactly what it takes to get this done on May 29th. My skills are on another level and I will make the necessary adjustments, wear him down and completely dominate this fight.

“This is the biggest fight of my career. A victory against Linares should gain me a lot of respect. Everyone knows that Linares is a dangerous fighter and winning this fight gives more reasons to all of the writers, fans, and boxing insiders, to campaign the unification fight with Teófimo López, or at the very least, a world title defense against Ryan Garcia. I’m putting the pressure on them.

“Las Vegas is where I currently reside. I’m thrilled to have an opportunity to fight in front of my family and friends. I’ve only fought in Vegas a couple of times, way back in 2016, before I became a world champion. I’m 100% ready to show up and show out. Las Vegas is the mecca of boxing’s biggest shows and for me this is just the beginning. Now that COVID restrictions are loosening, I’m encouraging all the fans from around the world to come out and enjoy a great night of boxing. It’s going to be fireworks.”

At the other end of the spectrum, there’s a professional debut on the card for Eddie Hearn’s latest American signing, Khalil Coe, Reshat Mati (9-0 7 KOs) enters double figures in the pro game on the card, Ramla Ali (2-0) has been impressive in her two fights since turning pro in October and the first pro female fighter from Somalia gets an introduction to American fight fans on the bill, a card that is rounded off by Devin Haney Promotions’ Darren Cunningham (13-0 7 KOs) continuing his pro rise.

The card takes place on Saturday, May 29. It begins at 5 pm PT / 1am BST, and main event ringwalks are expected at approximately 8pm PT / 4am BST.

CAN I WATCH HANEY VS. LINARES ON DAZN?

Haney vs. Linares will be available in all DAZN regions.