Berchelt-Valdez and Flores-Velez to air live on ESPN and ESPN Deportes at 10 p.m. ET/7 p.m. PT – Fight Fans outside the US can watch the fight LIVE on FITE TV (click here).

The 2021 Fight of the Year race has officially started, as Miguel Berchelt and Oscar Valdez will face off in one of the most anticipated all-Mexican fistic showdowns in years

Promoted by Top Rank, in association with Zanfer Promotions, Berchelt-Valdez and Flores-Cancio will be televised live on ESPN and ESPN Deportes at 10 p.m. ET/7 p.m. PT.

Berchelt (38-1, 34 KOs) has held the WBC super featherweight title since January 2017, when he knocked out Francisco Vargas in the 11th round. His last five title defenses have ended via the quick route, including a ninth-round TKO over Miguel Roman, a sixth-round TKO over Vargas in their May 2019 rematch, and a fourth-round knockout over former world champion Jason Sosa. He fought last June in a non-title bout and knocked out Eleazar Valenzuela in six one-sided rounds.

“This fight is the one that I dreamed of since we were both amateur fighters,” Berchelt said. “Valdez is a great fighter, and it will be a great fight. I am preparing with everything to win by knockout and leave no doubt that I am the best super featherweight in the world.”

Valdez (28-0, 22 KOs) is a two-time Mexican Olympian who vacated the WBO featherweight world title last year after six title defenses, which included scintillating 12-round barnburners against the likes of Scott Quigg, Genesis Servania and Miguel Marriaga. He suffered a severely broken jaw against Quigg in March 2018, returned 11 months later, and has since won four consecutive bouts. Since moving up to 130 pounds, Valdez has scored stoppage wins over Adam Lopez and Jayson Velez.

Valdez said, “Whenever there are two Mexicans in the ring, it is a guaranteed war, and it will be an honor for me to bring a great war to my fans.”

Brazilian middleweight contender Esquiva Falcao is coming back to America. After a pair of knockout wins last year in his home nation, the 2012 Olympic silver medalist will take on two-time world title challenger Artur Akavov in a 10-rounder Saturday, Feb. 20 from MGM Grand Hotel & Casino in Las Vegas.

Xander Zayas (6-0, 5 KOs), the Puerto Rican prodigy who celebrated his 18th birthday last September, will clash with Philadelphia native James Martin (6-1) in a six-round welterweight fight. Zayas signed with Top Rank at 16 years old and hopes to extend his knockout streak to four against Martin, who has never been stopped in the paid ranks.

“Since my last fight, I’ve had an extended camp and have been fortunate to spar numerous world champions and top fighters, which has provided me a wealth of experience,” Zayas said. “I’m excited to fight on February 20 and put on a show for my fans.”
Unbeaten junior lightweights collide when California Central Valley favorite Bryan Lua (7-0, 3 KOs) fights Puerto Rican prospect Frevian Gonzalez (4-0, 1 KO) in a six-rounder. Gonzalez and Lua won two fights apiece inside the MGM Grand Las Vegas Bubble last year, with Lua scoring a highlight-reel knockout over Luis Norambuena in his first fight following a 27-month layoff.

Sonny “The Bronco” Conto (6-0, 5 KO), South Philadelphia’s latest heavyweight hopeful, is set to return from a 13-month layoff against Waldo Cortes (6-3, 3 KOs) in a four-rounder. Conto battled assorted injuries throughout 2020, but he is ready for a busier 2021. Cortes fought Bubble favorite Kingsley Ibeh last June, giving as good as he received before being knocked out in the fourth round.

One of Puerto Rico’s brightest young talents, Omar Rosario (2-0), will make his Las Vegas debut in a four-round welterweight tilt versus fellow unbeaten Uriel Villanueva (1-0). Rosario, a 23-year-old from Caguas, won the 2020 Olympic Trials for his home nation at 152 pounds before electing to turn pro.

WHAT TIME IS BERCHELT VS VALDEZ?

WHERE & HOW TO WATCH BERCHELT vs VALDEZ?

WHERE IS THE BERCHELT vs VALDEZ  FIGHT? 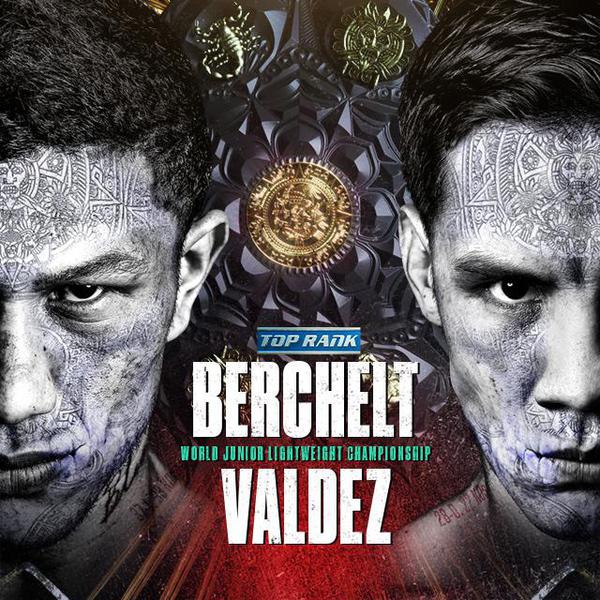