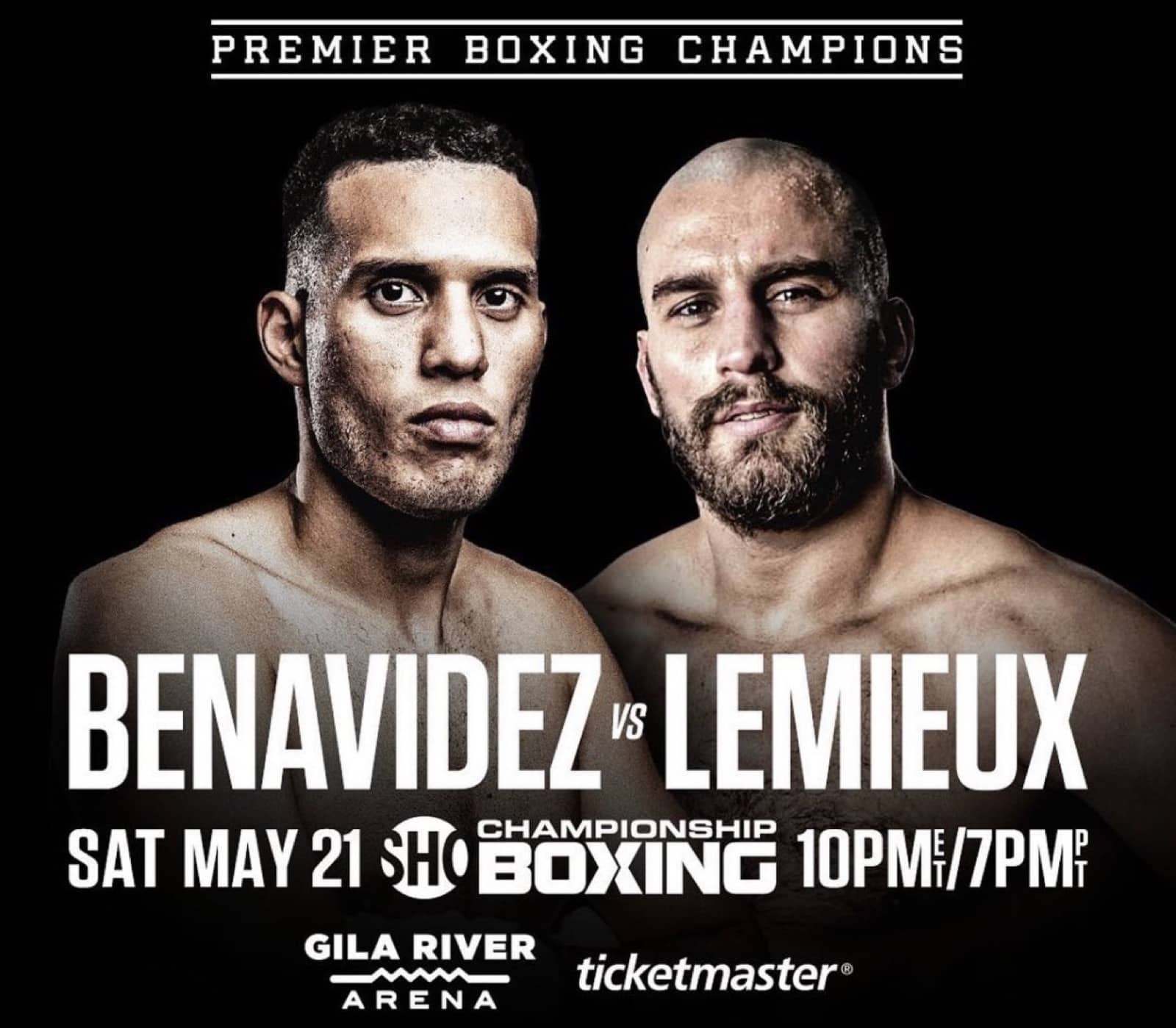 Unbeaten two-time world champion and Phoenix-native David “El Bandera Roja” Benavídez will look to thrill the crowd in his home state for the second consecutive time when he battles former world champion David Lemieux in a 12-round showdown for the vacant Interim WBC Super Middleweight Title headlining live on SHOWTIME Saturday, May 21 from Gila River Arena in Glendale, Arizona in a Premier Boxing Champions event.

Tickets for the live event, which Sampson Boxing and TGB Promotions promote, are on sale now and are available for purchase through Ticketmaster.com at the link HERE.

“I’m looking forward to this fantastic fight between David Benavídez and David Lemieux on May 21,” said Sampson Lewkowicz of Sampson Boxing. “It will be bombs away between two great punchers when they get in the ring and whoever wins will be at the top of the division and looking at some very big fights on the horizon.”

“David Benavídez is one of the most feared punchers in the sport, and the fans in his home state of Arizona will be able to see their local hero once again on May 21 when he challenges a fellow knockout artist in former champion David Lemieux,” said Tom Brown, President of TGB Promotions. “There will be an exciting undercard live on SHOWTIME leading up to Benavídez’s showdown with Lemieux that will see the winner capture the interim WBC Super Middleweight title and move one step closer to regaining their world champion status.”

Still just 25-years-old, Benavídez (25-0, 22 KOs) enters this fight having knocked out his last five opponents, including a September 2019 knockout of two-time super middleweight champion Anthony Dirrell. Most recently, Benavidez returned to fight in Arizona for the first time since 2015 and delivered a dominating seventh-round knockout of Kyrone Davis. Benavídez is trained by his father José Sr., alongside his brother and former title challenger, José Jr. In 2017, he became the youngest super middleweight champion in boxing history by defeating Ronald Gavril on SHOWTIME at just 20 years old. Benavídez went from a 15-year-old prodigy sparring with Gennady Golovkin and Peter Quillin, to world title contender with a 10-fight knockout streak from 2015 through 2017, including a highlight-reel knockout of Rogelio Medina with a seven-punch combination that earned him his first title opportunity.

“I’m excited to be fighting for another belt, and I’m training extremely hard because it is another big opportunity for my career and future,” said Benavídez. “David Lemieux still has a lot of power, so I have to make sure I sharpen all my skills 100 percent. I’m confident I can stop Lemieux and I’m planning on giving my fans another great fight on May 21.”

Fighting out of his native Montreal, Quebec, Canada, Lemieux (43-4, 36 KOs) has won five consecutive bouts heading into May 21, including three-straight wins since moving up to super middleweight in December 2019. The 33-year-old became a middleweight world champion in June 2015, defeating Hassan N’Dam to capture the belt before dropping a unification bout against Gennadiy Golovkin later that year. Lemieux would earn a second shot at the 160-pound title, eventually dropping a decision to Billy Joe Saunders in December 2017. Lemieux is a proven power-puncher who owns knockouts over a slew of contenders including Curtis Stevens, Gabriel Rosado, Gary O’Sullivan and Glen Tapia.

“Ever since I turned professional, I’ve had my eyes on the WBC belt,” said Lemieux. “This is my chance to grasp it. This is a very important fight for me and I plan on making a strong statement on May 21. I’m coming to win.”

The 24-year-old Gómez (5-0, 5 KOs) made a big statement in his U.S. debut on Christmas, blasting out the typically durable Clay Collard in the first round of their showdown. Born in Havana, Cuba and now fighting out of Las Vegas, the southpaw showed power in both hands and relentless finishing skills, immediately making him a rising contender in the talent-laden super welterweight division.

“I’m very excited to be making my SHOWTIME debut against a tough veteran fighter like Jorge Cota, who has been in the ring with some very big names,” said Gómez. “I want to deliver a memorable outing with a spectacular performance. I’m going for the knockout and I’m not going to be shy about it. I can’t wait to show everyone watching that I’m the new monster in the super welterweight division. This is a dream come true for me and I’m not going to let this opportunity pass me by. I want to be recognized as the next great fighter from Cuba and with the new breed of Cuban fighters who are big punchers with great ring IQ’s.”

Cota (30-5, 27 KOs) is a rugged slugger who will present a step-up for the rising Gómez on May 21. Cota most recently dropped a May 2021 bout against unbeaten Sebastian Fundora and has also shared the ring with unified 154-pound world champion Jermell Charlo, former unified world champion Jeison Rosario and top contender Erickson Lubin. The 34-year-old from Los Mochis, Sinaloa, Mexico scored back-to-back stoppage victories prior to the Fundora fight, defeating Thomas LaManna and Cesar Chavez.

“I honestly don’t see much in Gómez as a fighter,” said Cota. “I don’t understand why his team picked me as an opponent because he lacks experience and has never fought anyone at my level. He’s not ready for the kind of pressure that I’m going to bring. I strongly believe he made a mistake in agreeing to this fight.”